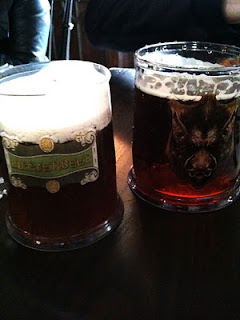 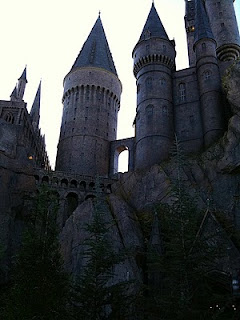 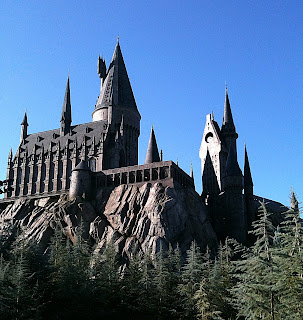 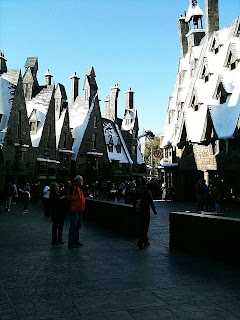 If you were thinking "But I thought you were in Disneyworld", you're right. HP world is at Universal's Island of Adventure. We hired a driver to take us to the park, unbeknownst to our faithful Disney Devotees. Of course, I give myself away returning to Disney with a striped red and yellow scarf around my neck.
And once we reached Universal, we spent almost the entire day in the Harry Potter section of the park. We, as well as everyone else, ran straight to the back where this wonderful world was, thinking to beat the crowds. But the 'crowds' had the same idea. I really think most of the park's guests were meandering through Hogsmeade all day. But still, according to the nice Irish Hogs Head bartender, this was the most quiet week he'd seen since the parks opening in June!
When we entered Hogsmeade and wer e greeted by the Hogwarts Express, I was in awe, looking everywhere but where I was walking, and consequently running into people. The attention to detail was incredible-snow on the roofs (which only made the 46 degrees in Florida that much colder!) leaning chimneys, doorways, and walls, all the stores--we stood for a bit just taking photos. There were owls in the owlery, up in the rafters, accented with poop stains. Ollivanders, Zonko's, Honeydukes, Dervish and Bangles... Photos below. I bought a scarf at Filche's Emporium of Confiscated Goods. Gryffindor, of course. Lots of Slytherins walking around though. I was on my guard.
There were a few shops that were 'closed', and when I asked an employee when one in particular would open, she said : "They aren't open to muggles". She was wearing green. I should've known better.
We ate at the Three Broomsticks. Three times. I must say the butterbeer was incredible! It tasted like shortbread cookies with butterscotch foam... And that foam was thick! They actually make the foam separately, top off your drink with it. Hogs head brew was great too-- and we got the commemorative mugs (see photo below). Oh and Hogs Head does in fact have a hog's head...that moves.
Then, of course, there's the Forbidden Journey at Hogwarts. It's a ride/interactive movie/ flip you through the air in a cage through the castle as you journey through the adventure that is Harry Potter. From Quidditch, to dragons, to dementers trying to suck your life: it was all there! It was amazing in that the ride was so personalized...you're only aware of the people in your 'cage'. However, Ben and I still walked off nauseous from the 'twirling in the air before a moving screen' flying effects. When/if we have kids: Dramamine. The line itself was amazing. You wait in the many twisting turning corridors of Hogwarts, passing through a hall of moving/ talking portraits (just like the movie). You pass through the Defense Against the Dark Arts classroom where Harry, Ron, and Hermione stand on a balcony above, warning you of your current danger--and, of course, accidentally making it snow in the room. There's Herbology, Dumbledore's office (he's in it too), the sorting hat, the daily prophet with moving photographs. Needless to say, if forced to wait, you're highly entertained.
The Flight of the Hippogriff was cute and fun, traveling past Hagrids hut. And the Dueling Dragons was a high-speed rollercoaster--guests enter through the Triwizard Champions tent.
And playing constantly all throughout the park were those familiar musical themes we love and recognize.
Overall, my thought on this incredible new attraction? WICKED!!!!
FYI many more photos of the details in this world were taken- hope to post somewhere soon.
Posted by Bkloss at January 13, 2011