The Scorch Trials by James Dashner

Now, if you haven't read The Maze Runner (you can read my review here) and have even the slightest hope of doing so, I might suggest you stop reading this.

Don't say I didn't warn you. 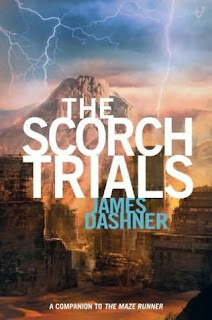 It's taken me a few days to figure out what to say. On the one hand, I couldn't put this book down. But on the other hand...(I have five more fingers, yes, I know) it took more of an apocalyptic turn.

The Scorch Trials picks up right where The Maze Runner leaves off. The boys (and Teresa) are safe and being cared for by the strangers that rescued them. Except the sense of safety lasts maybe two pages before you're thrust into yet another mind-boggling, unending sense of hopelessness with the realization that this "safety net" was all a ploy, just another part of the Trials. There is something even greater, something more dangerous, they have to endure - all in the name of saving the human race from total destruction.

Their next mission: to walk north 100 miles to a new "safe-haven". Sounds easy, right? Well, maybe I should mention the 100 miles is across barren wasteland scorched into oblivion by solar flares, equipped with magnificent electrical storms with no place for you to hide, unbearable and blinding heat, and diseased zombie-humans on the prowl.

I don't feel I can give an adequate review beyond this point. Mainly because I'm not a fan of zombies and I hate being scared. That being said, this book wasn't the kind that left me waking up in the middle of the night thinking every shadow was a zombie (and, consequently, making me attack my dog). No, no, no. Despite fearing whatever monstrosity lurked on the next page, I simply HAD to turn it ("click" for you Kindle readers). I had to know what was going to happen next. With all the unanswered questions, thrilling pace, plot twists, I had to go on.

Needless to say, by the end I was exhausted, worried I was going to slowly mutate into a zombie. Well, not really. But, if you like dystopian/zombie/apocalyptic novels, definitely give these a try. Even though this particular blend isn't my favorite, I'll still read the third and final installment of his series, The Death Cure which will be released October 11, 2011.