Your MC Lives a Parallel Life...

A little over a year ago I read The Writer's Journey:  Mythic Structure for Writers by Christopher Volger. Perhaps some of you have heard of it or read it for yourselves. It was an interesting book that focused on the parallels between the journeys of our fictional "heroes" and our own. At the time, I thought the concept was simply interesting, nothing more. Of course, at that point, I was at the starting line, squinting my eyes through the shadows of an unknown forest, preparing for what "could" happen. Even though sections of the dirt trail were hidden behind monstrous trees and thick underbrush, I could still follow its general direction. And, I packed my backpack accordingly: Camelback, granola, trail mix, poncho, extra socks, GPS, and two cans of OFF. Mosquitoes? Just try and bite me! What I failed to see was the abrupt turn in the trail, you know, the one that leads through a dark cave and into forbidden lands where monsters and armored foes carrying battle axes dwell?
Well.
I should've seen it coming. I mean, come on, Christopher Volger warned me.
In his book, he talks about the archetypes you meet (ie hero, mentor, threshold guardian, shapeshifter, etc). But, what I want to focus on is the journey he talks about. Each stage is in bold.
The Ordinary World. It's where you (and your MC) came from, that safe (and boring) state of being in which your subconscious drips like a faucet in your ear saying, "There must be something greater." You can't shut it off, and it prevents you from ever being satisfied. Drip...drip...drip...
Then, you get the Call to Adventure. That idea pops into your head. Wait, no. It plants itself in your head, wraps thick roots around your brain and refuses to leave. You can't stop thinking about it, nor can you stop thinking about the wonderful people you just met in your head. (Don't worry, you're not schizophrenic.) Oh yeah, sure. It seems exciting at the time. "There IS something more!" You say.
But then you dwell on it and...Refusal of the Call. Self doubt creeps in. You tell yourself you don't have what it takes, you're overwhelmed. You don't have time, nor the skill--what were you thinking? Maybe you've even started outlining your plot and you drowned in the details. You compare yourself to the masters and think, "Who the heck do I think I am, trying to write a book?!" But that idea still lingers in your head, pommeling against your skull, and, for those of you reading this, it has probably won over your fears (and given you a massive headache).
You Meet with a Mentor. You've decided you're going for it. The nagging won't stop and besides, you're tired of the ordinary world. But, you need support. You need guidance, encouragement, and training, and you may find all of that through blogs, critique partners, writing workshops, conferences, reading, etc.
All of that enables you to Cross the Threshold into actually writing your story. (Go pat yourself on the back for being so prepared.)
(And, for all intensive purposes, let's exchange the word "writer" with "fighter".)
Test, Allies, Enemies. It's not as easy to categorize as it seems. The lines may be blurred. People you thought were allies turn out to be enemies, and vice verse. You fight little skirmishes along the way--with yourself, with others. You meet other fighters, talk to other fighters, trying to make sense of what's next. You trudge through the murk and mire, holding that sword (manuscript) in your hands (sometimes others salvage it out of the mud for you)...and, voila! You've done it! You're so happy. You wrote a book and now...watch out world, here you come! 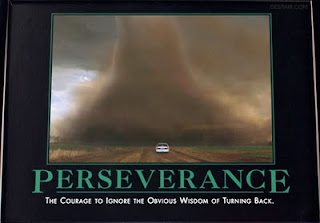 And you're feeling pretty good about yourself, too. You've made some friends, learned so much you didn't know (and, hello?! Finished a book!). So, you continue on your Approach to the Inmost Cave, head held high, beaming from ear to ear.
You poor, little sap you.
The Ordeal.
They were waiting for you on the other side. You didn't see them coming, but they were there, hiding in the weeds, blades glimmering in the sun. And that gigantic, scaled dragon breathing fire? Yeah, he's real. But there's no turning back now. You already put yourself out there and your escape is sealed. Those that accompanied you are watching, giving advice all the way. Some of it's helpful, like your ally saying, "Go for the dragon's underbelly!...That's it. Good move!" But some of those "fellow fighters" you thought were allies, actually turn on you. "You know, I never told you this before, but you really look ridiculous with a sword. I'm a little surprised the dragon hasn't eaten you yet." Or, "You're an embarrassment, your movements are stiff and formulaic. Go back to where you came from and let us experts handle the rest. Next." Their taunting hurts you worse than the huge gash on your leg where the dragon clawed you.
You hope to make it out alive, because if you do, you'll attain your Reward. Whether it's finding an agent, getting published, or simply having a product you're proud of, there's a sense of fulfillment. You made it...alive. You've got battle scars--heck, you may even be missing an arm--but you're alive.
The Road Back to your ordinary world is different. You may encounter some more skirmishes, but those are nothing compared to the battle you just fought. You found out who your real allies were along the way, too. Besides, you got what you came for, and that will help you deal with the rest.
You're a changed person now, you've been Resurrected. You've gone through the gauntlet, and you've come out a new man with a new perspective (and less appendages). Your skins as impenetrable as body armor and what you've learned is invaluable.
Now, you can Return with [the] Elixir: your final product. And, your life will never be the same.
See, you're not so different from your MC, are you?
How do some of your paths resemble that of your MC? Are there any "dragons" that took you by surprise? And, how did you survive/are surviving "The Ordeal"?
Posted by Bkloss at April 17, 2011