This past week I was in Vegas for a national work meeting. There were so many great speakers - informative and motivational - I'm still scrambling to hold on to their words of wisdom, while holding Inspiration in a choke hold (he keeps trying to run away...). We had everything from an orchestral conductor to an author (Frans Johannson, The Medici Effect) to a successful chef (Jeff Henderson) who'd discovered his passion (and success) in a prison kitchen.

I thought I'd share a piece of my week - something that's been simmering in my brain ever since - which can be summed up by this little graph: 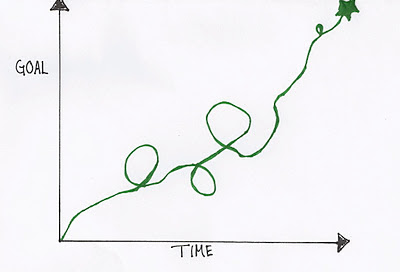 Not something you'd see in math, eh? (Unless, perhaps, you're studying Particle in a Box theory...*rubs temples*) This is a graph of reaching a goal. When that initial idea sparks in your brain and you get to work realizing that idea.
NEWS FLASH: The journey toward reaching a goal is never a straight line.
Now, let me back up a little. There was a study done that observed %Genius, by giving various age groups random objects to see what combinations they could come up with. They studied anyone from age 3 to 26. Know what they found? That the 3 year olds were 98% Genius while the 26 year olds were at 2% Genius. Why? Because the older you got, the more your logic got in the way.
Yeah, yeah, I know. A 3 year old can't really do anything about those ideas, but that's not really the point. The point is to show us all the opportunities we miss. Everything we don't do or try because we say to ourselves, "Nah, that won't work," or "I'm not smart enough," or "Everyone will think I'm an idiot."
Dean Simonton says “innovators don’t produce because they are successful, but that they are successful because they produce. Quantity of ideas leads to quality of ideas.”
Which brings me back to the graph. You may get some great idea, and even if you DO set out to do it, you let one of those downturns make you stop. You let doubt creep in and you listen to that little version of yourself that holds a chisel and hammer and merely exists to chip away your confidence. (It's also been known to use TNT.)
You MUST ignore it (maybe even get a bandaid), and keep going.
It's why we love to read stories about heroes and heroines that never quit. No matter what challenge is presented, we love to watch them figure out a solution. We love to watch them grow while they find success through their failures. (Unless you prefer tragedies...which I don't...)
It takes finding failed ideas before finding the ones that won't. But the point is we keep trying.
Posted by Bkloss at November 20, 2011 19 comments