I've got some news and a confession.
Let's start with the confession (I mean, let's face it, you were probably more interested in THAT anyway...). I've been a horrid - HORRID! -  commenter as of late. There have been so many events in my life (some I can't say yet, others I'll share shortly) that have prevented me from spending much, if any, time on Blogger. *extends hand for vicious slapping* I want to thank you for taking the time to read and comment regardless!
Ben started Dental School (200 pages of notes on Day 1???...er, um, I mean, YAY!), and I've been very busy doing final edits on my ms (thanks, Laura!) while writing book two. Also, on Friday I leave for Europe!! Off to Sweden, Denmark, and Italy for two weeks with my uncles and sis. First time I've traveled internationally without Ben. Kinda freaks me out, but not enough to stay home. :) If I don't blog while there, I'll definitely share highlights/photos when I get back.
And...Gaia's Secret has a cover! (Thanks, Ben!) This has truly been one of THE coolest pieces of the literary puzzle - "seeing" an actual image for my story. I wouldn't be here without you all, and I can't wait to share it once I come back from across the big pond.
In the meantime, Happy Labor Day, and I'll leave you with this...
Some students wrote to Roald Dahl, asking him questions about his short story collection, "The Wonderful Story of Henry Sugar and Six More." Here's his response: 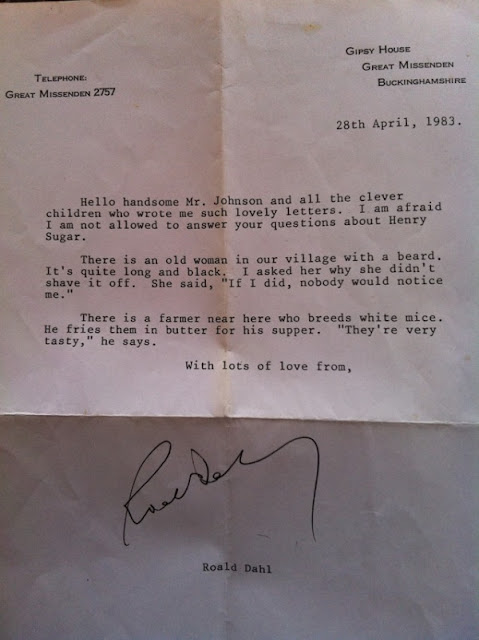 Email ThisBlogThis!Share to TwitterShare to FacebookShare to Pinterest
Labels: Because it's Funny, Story, Travel

Eat your Humble Pie and Shut Up.

I've been thinking about this word a lot lately because, well, it's what my main character deals with. Over and over again. (And for those of you that know Daria Jones, my little obstinate heroine, you might see what inspired Character Flaw #1: Apparent lack of humility.)

Here. I'll give you an example. I like examples.

Every year for about five years, the hubby and I would hike Half Dome. If you know what Half Dome is, you might think I'm insane. If you don't, know that it's a hike in Yosemite National Park, a little over 8 miles one way with the last 400 yards being up the side of a steep granite wall with only cables for support, and an overall 4500' elevation gain. (you might think I'm insane now, too.)

No really, it's fun. I promise.

As I was saying, every year the hubby and I would go, and every year we would "take" different people. And one of those years we brought someone - let's call our anonymous hiker Jill. Jill is one of those insufferable know-it-alls. A one-upper. You had a great weekend? Well, hers was better. But I digress...

Weeks before the hike, when THE one and only Experienced Hiker (aka me) was planning, Jill already knew everything, had thought of everything, and had so much wisdom to impart I was about ready to tell her we weren't going. I don't know, maybe the campground flooded or a group of bears recently attacked or a hurricane was coming (?). ANYTHING. (Know anyone like that? Yeah. Not fun.)

But rather than fabricate some excuse, I do something else. (Because I'm so smart. I'm experienced.) I decide to invite a secret weapon: Humility. Besides, I'm the one that had hiked it before. Humility would back me up.

Day of hike. Wake up at 5am and get moving (ignoring early-morning advice from Jill while talking myself out of pushing Jill over a waterfall). "Jill will see how tough the hike is." I smile to myself. "And then Humility will shut her up. She'll see."

Three miles in and Jill still won't stop talking about how smart she is. I'm wishing Humility would show up already and throw Jill down, but Humility is no where to be found. And I'm not feeling so good. Probably because I'm so annoyed.

And then this happens (ahem):

Jill: "You're not looking so good."
Me: *rolls eyes inwardly* *smiles* "I'm fine." *looks around for Humility to do said deed*
Jill: "No, you're pretty pale. Did you need to rest? I don't mind waiting for you."
Me: *fights urge to push Jill in river* "Really, I'm fine."

Then I finally see Humility on the trail, all decked out in camo. FINALLY! But what does Humility do?

It kicks out my legs and spits in my face (also known as passing out beside a waterfall). My hearing fades, my vision turns black and...

When I finally came to, Jill frowns. "I told you that you shouldn't eat cookies for breakfast." By then I was too embarrassed to be angry.

Humility is shifty. (It's also closely related to Blow to the Pride.) While you're waiting for Humility to assassinate someone else, it'll most likely go ninja on YOU!

Maybe instead of eating cookies in the morning, next time I'll have a slice of humble pie. And shut up. :)

Have any similar experiences where Humility went ninja on you? And for you authors, which life experiences inspired your characters?


**FYI: NONE of the below photos are from The Year of Jill. This is an entirely different trip, with VERY fun people :)**

*If you like YA Fantasy, check out my book, GAIA'S SECRET. The sequel is coming soon!
Posted by Bkloss at August 15, 2011 19 comments

Email ThisBlogThis!Share to TwitterShare to FacebookShare to Pinterest
Labels: Because it's Funny, Story, Travel, Writing

Gosh, it feels like Christmas!...with book giveaways and blog awards all wrapped in pretty digital red bows. (No tinsel, please. Not even digital tinsel. That stuff gets everywhere.)

Monday pushed me out of bed and kicked me in the face, and lo! One of my favorite bloggers, the amazing Peggy Eddleman  left me one of those digitally wrapped presents (without tinsel) - the Liebster award, which spotlights up and coming bloggers who currently have less than 200 followers.

Now I get to play Santa (see, I told you. Christmas!) and pass them around with good tidings (and no tinsel)!

Here are the rules:

(1) Thank the giver (Thanks, Peggy, you're attitude is awesome!...but you really need to stop posting pictures of cookies in the morning...) and link back to the blogger who gave it to you.
(2) Reveal your top 5 picks and let them know by leaving a comment on their blog.
(3) Copy and paste the award on your blog.
(4) Have faith that your followers will spread the love to other bloggers.
(5) And most of all - have bloggity-blog fun!

So here's my list, and please go visit these great people!

1. Laura Josephsen - One of my favorite people/bloggers/writers (can someone please invent a term that encompasses all of these things?) She's an awesome writer who blogs a lot about writing and her experiences with publishing.

2.  Donna K. Weaver - So Donna doesn't really fit the <200, BUT her posts about writing and grammar (THANK YOU!) and everything else pertaining to the literary world is awesome!

3.  Lindsay N. Currie - She's got such a beautiful blog! And she writes a ton of great posts about writing and the writing community.

4. Beth at Of Muses and Meringues - Um, food AND books AND travel? Exploding from too much goodness...

5. Julie at From Pen to Paper - I love the way Julie writes - about writing, about books, about, well, everything! Her posts are so fun to read.
Posted by Bkloss at August 08, 2011 40 comments

And We Have a WINNER!!

It was sooooo hard for me to choose. The comments you guys left were fabulous! (If you missed out, you can read them here.) And I must thank you because I smiled and laughed, reading all of your answers :) So, THANK YOU! You guys are awesome.

And the winner is...

Who, poor sap, was actually stripped of his award. Read his confession for yourselves...


"I was stripped of my Professor of the Year award at Hogwarts for perfecting a Patron-Us charm that turns water into Patron'. Mr. Filch is sleeping in for some strange reason."