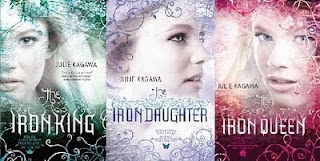 Julie Kagawa is to blame for my delay in 'journaling'. I try to blog about books I read, as I read them. But this series was so captivating that instead of writing about book one, I kept reading. And reading. And last night, I finished! It's been awhile since I've read a series that's taken over my thoughtlife. So, Julie Kagawa if you ever, ever read this, PLEASE HURRY UP AND FINISH THE IRON KNIGHT! (book 4 in her series). I'm dying over here!


The Iron Fey series is about sixteen-year old Meghan Chase that discovers she's actually a half-blood faerie princess, her real father being the Summer King Oberon. That's only the beginning of the faerie-twisted, Shakespearean-esque satire set in the modern day. Her best friend on Earth is the comical, fun-spirited Robbie, whose actually Robin Goodfellow from a Midsummer Night's Dream, sent to protect her. And, of course, like all Shakespeare stories, Meghan falls in love with the son of the winter Queen Mab and Meghan's elven-family's enemy: the Winter Prince, Ash. He's the Hot-Boy-With-Sword: dark hair, lean, muscular, with silver eyes, skilled fighter, and an icy-demeanor that only Meghan can melt. It's...beautiful.


With technology in the real world growing exponentially, a new power has risen in the Nevernever: the Iron Kingdom. Iron is toxic to faeries and threatens to destroy all of the Nevernever. The series follows Meghan as she finds love while embracing her place in the Nevernever. It's an exciting, unputdownable adventure, with memorable and funny characters whose development I thoroughly enjoyed reading. The ending of book three is both perfectly satisfying and heart wrenching (still suffering). Ms. Kagawa's balance of action and romance is perfect--the scenes are described beautifully while capturing emotion that yanks the reader right into the story. (Which is why I've gotten nothing done all week...ahem...Ben's started to metabolize his own muscle.)


A little caution: there's some language throughout the series. It tapers off drastically after the first book.
They are, as follows:
The Iron King, a novella called A Winter's Passage, The Iron Daughter, The Iron Queen.


The fourth and final installment, The Iron Knight, is slated for release in the fall. AND it's supposed to be told from Ash's perspective. But please, Julie. HURRY! Don't do this to me!